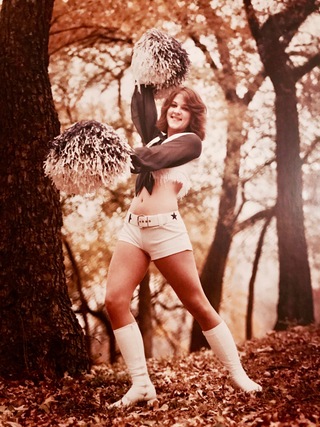 Lynne was born in Dallas and spent her childhood swimming in the summer and watching the Dallas Cowboys in the winter. She tried out for and made the Dallas Cowboys Cheerleaders squad when she was nineteen. She spent one year in the vinyl boots, saw lots of great football from the best seat in the house, and performed at the Super Bowl.

Post-cheerleader, she earned undergraduate and graduate degrees, both in business, from Southern Methodist University, and took her first job working as a financial analyst for American Airlines. After several years navigating the cubicles at headquarters, she thought she might like to see an airplane and moved to the field. Her first airport assignment was in Memphis, where she met a woman who had dated Elvis Presley. Her last assignment was as the general manager for the operation at Logan Airport.

She began her writing career in Seattle where she had moved to join a small engineering consulting firm. She'd always had a facility with words and language and decided to see how the ability to spin out memos and reports translated to fiction. She signed up for writing classes at the University of Washington's Extension Program and wrote the first words of HARD LANDING. Three and a half years and many classes later, she sold it to publishers in the U.S., the U.K., and Italy, and her Alex Shanahan series was launched.

Lynne moved back east after her first book was published to be closer to her family. She lives in the Boston area.